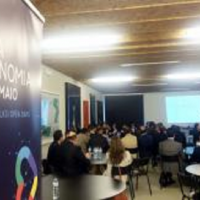 As part of the program of activities of Economics’ Week, an initiative by InvestBraga, the dst group promoted an Open Day on May 5, on the premises of the company and throughout the morning. The initiative included a presentation of the group to the participants, a space for debating of ideas and a visit to the entire administrative and manufacturing complex.

With the participation of José Teixeira, chairman of the dst group's Board of Directors and Carlos Oliveira, president of InvestBraga, Open Day started very early, with interventions by representatives of the two institutions. The participants of the event also had the opportunity to attend a presentation of the dst group and all its business areas, namely engineering and construction, environment, renewable, telecommunications, real estate and ventures, followed by a moment dedicated to the sharing of Ideas. Open Day continued with a visit to the dst administrative complex, which included a visit to the production centers, tmodular, bysteel, health center and sports campus.

"The objective of Open Days during Economy Week is to bring the regional companies closer to the community, letting them know the good business examples of the county," said Carlos Oliveira, after the initiative.

Economy Week ended last Friday, with the visit of the Portuguese Prime Minister, António Costa, and the holding of the Economic Forum, where topics such as the Future of the Portuguese Economy and Investment and Strategy for Industry were discussed. In addition to António Costa, the former Economy Ministers Carlos Tavares da Silva (current President of CMVM), Daniel Bessa, and Mira Amaral (BIC President) were also present, as was the current Minister, Manuel Caldeira Cabral. The event was also attended by three leading companies of the region: Bosch Car Multimedia Portugal, Fujitsu and WeDo.